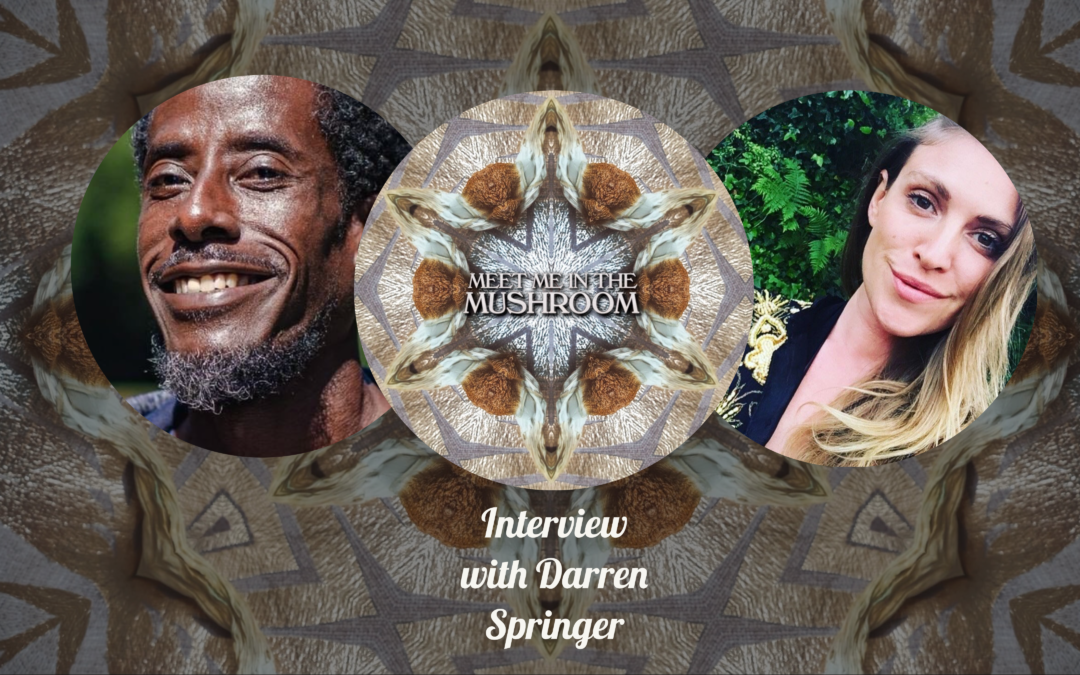 An Interview with Darren Springer: Episode 2

This is the second episode in a 12 part series dedicated to exploring Psilocybin. Darren Springer is a mycologist, educator, researcher and event organizer based in the UK. With a passion for exploring the African roots of Sacred Mushroom use. This interview explores Darrens Afro-carribean heritage, his mentor Kilindi Lyi, self exploration with psilocybin and much more.

Darren: “There’s a lot, you know, always come from the premise of it’s funny, I made a post a couple days ago in relation to this, just as far as you know, when I started my research and interest in this area, you know, I was privy to, you know, Ancient Egypt, or ancient Kemet, as it was called by the people from that land.

And, Kilindi ,what he did was basically brought a lot of the information I was already privy to, and shared or revealed, as he would say, what was hidden in plain sight. You know, it was stuff and glyphs, what we will call hieroglyphs that are… that I had my own interpretations and understanding of, books and encyclopedia’s that would explain what these meant but Kilindi was able to give another perspective, another view on what these what these glyphs meant, and opened up a whole world of interest for, you know, further interest in discovery for me.

But when I started my own research, I was like, all I want to do is go back to the beginning, I want to just go back as far as I can in the history, as well as recorded as well as unrecorded history. And see what the people from the land say, and what they have, what connections they have with the plant medicine and fungi. So, you know, history as far as the ancient lineage of human beings, takes us back to Africa, but then it takes us to particular groups within Africa. And the two main groups that pop up were, you know, the so called pygmy people of,  Central Africa, and I say, so called, because that’s not how they refer to themselves, that’s a kind of derogatory term, in fact, but they were known as the Toyi, the Aka, the Bayaka of a Bongo and then Bowoti. And these are the earliest human beings that we find that are still here on earth to this day. And even to the point where when Europeans first encountered these people, they didn’t consider them as humans, because they’re small people, you know, three to four foot high. And they were saying like, there’s some kind of advanced primate, they’re like monkeys, because we find them living in trees and stuff like that. And they’re actually captured by Europeans and put in cages and toured around the world. In some cases, as these missing links and animal… wild animals.

I always highlighted the reason why they lived in trees because they were small people. And when you go to indigenous cultures, whether it’s Africa or the Americas, you find that most people raised their houses or homes off the ground so very smart, wise thing to do. When you’re living on the ground where there may be lions, elephants, snakes, scorpions, things that… that kill you one bite or sting. Good idea would be to raise your home’s off of the… off the land and build as these are things that you learned in permaculture now few people are familiar with permaculture and stuff. So these were Permaculture is way ahead of their, you know, way ahead of their time, but you’ve got small people of central and west Africa. And then you’ve also got the small people of South Africa, the southern regions, you know, where you’re located in South Africa, the so called Bushman or the Khoi people the Khoi Khoi, Khoi San, you know, they are known by a range of different names when you do the research, but these are the two you know, in fact that, you know, the Khoi San people are the oldest, what research is suggesting, though, that they’re the oldest groups of people that basically ended up populating planet Earth, you know, all people on planet Earth commonly descend from these people. So that was kind of like I need to get that verified and I’ve got that verified.

And then I was like, okay, so if these are the earliest people, do they have any traditions, recalls or history of using these plant medicines and oh, yeah, they do. You know, so how connected it was with the small people of Central Africa. They are the ones who were gifted and people may have may be familiar with Iboga. Or the active ingredient inside Iboga known as Ibogaine. No one has a bowl game, this plant you find in that region indigenously, and this is who the plant was gifted to, and so they have a history of working with these plants. Although in the west now we know it for potentially supporting people with addiction like alcohol and heroin addiction. This is not what the people were using the plants for in these regions, probably didn’t have heroin challenges and alcohol challenges until Europeans were there to introduce these things to them. With that said, you know why and how did they use it in Central Africa? and it was basically a tool or technology for communicating with the dead. Just like when you go to a lot of these indigenous cultures around the world, they say, this plant allows us to communicate with our spirits, our ancestors, you know, with the unseen or the unknown, that’s what the plants are actually for. Yes, there are other benefits that we glean or get from technologies, but they were primarily gifted to them to speak to their ancestors, you know, and that’s what and how the people of Central Africa will say they were gifted Iboga.

But that’s not the only thing that they deal with, there’s a range of different fungi that they deal with and other psychoactive plants that enable them to use them as the technology they use them for. And that’s right through their whole pretty much their life, you know, like, if you’re looking at you, as a child, you would have been, you know, introduced to these plants pre birth, you know, this is like how, you know, in a sense, where, you know, your parents may have conceived you under the influence of these plants, because we know mushrooms and others at lower dosages are, you know, an aphrodisiac for lack of a better word, you know, like the ancient Viagra, you know, and allow you to stimulate yourself sexually. So these were used under those circumstances, which later became the tantric arts and things like that, that you find throughout Asia. But with that said, a word also, you know, a mother while you’re being, you know, groomed and developed in her womb, she would be partaking in various ceremonies, and rituals and rites where she may well what we would call micro dosing now, you know, so all of these things are not new, they’re really ancient, so you would have been partaking in this while you was in your mother’s womb, let alone you would be microdosing as a child, you know, it’s because ceremonies where they give the child, you know, the Sacred plants, as early as you know, a few months as it might be the first food, the first solid that you could partake in, because you would have been getting the mother’s breast milk, you know, it’s like, there’s so many ways that it was introduced to you, up until the point where you would reach what we call puberty or adulthood, where you would then have direct experience and be conscious of what you’re getting involved in, when it comes to these plant medicines.

So you could discover yourself, so to speak, and like we encounter in the West, like not having to wait to you’re in your 30s or 40s, having a midlife crisis, trying to discover what you was born for what your purpose in life is, like, you find it out early, you find out when you’re 9, 10, 11, 12, 13, those types of ages. So things are aligned appropriately for you to live your life, so to speak. So I’m saying all that to say that, yeah, in South Africa amongst the Khoi, you know, they’ve got similar customs and traditions.

And ironically, I was watching something a few weeks ago, that was looking at how some of their dance rituals that they have, the so called Bushman and their dance rituals actually allow them to commune with their ancestors, because what they discovered was that these dances and rituals and chants and mantras that they affirm, inspire endogenous DMT experiences, so allows them to see and hear things that the average man don’t see or hear. And, you know, this is what these people were dealing with way back in the day, what I refer to as ancient organic technology, but they are there for, you know, us to use in the here and now. And I guess for the findings we’re finding out about them are useful and beneficial, but I just like to give credit where credit is due.”

This show explores entheogenic mushrooms across a broad spectrum – from shamanism to art, clinical research to mystical experience, witchcraft to mycology. Each month takes us on a journey with unique individuals who share their experiences and wisdom